These days, many of us are familiar with the use of tarot cards for divination purposes. But how did tarot card reading start and how did it evolve into the use we enjoy today? Whether you’re new to tarot or you’ve been interested in the cards for a while, it’s helpful to understand where they came from and how they became the intuitive tools we use today.

At Asheville Wellness Tours, we offer group tarot readings as a wonderful way to connect more deeply with each other and with ourselves. These can be done in-person or virtually, so you can stay connected even across great distances! And we love recommending a group tarot reading if you’re coming to Asheville for a bachelorette party or other special occasion with your group. Feel free to reach out with any questions about our offerings.

For now, let’s dive deeper into the history of tarot reading so you can learn more about the experience of having your cards read.

Where did tarot cards come from?

The first tarot card decks were created in Italy in the 1430s. Regular playing cards had become popular in Europe in the preceding half-century, which led to wealthy families commissioning customized decks from artists. The oldest-surviving complete tarot deck we have today is the Sola Busca Deck, originating in Italy in the 1490s.

The typical playing cards at the time had four suits, just as they do today. When the tarot deck was created, a fifth suit was added, called the trionfi, or triumphs. The trionfi had 21 cards with ornate illustrations, plus one additional card called il matto, or the fool.

These ornate cards were used to play a game called tarocchi in Italy, which was changed to be  called tarot when it became popular in France.

About the Tarot Card Deck

The standard tarot deck we use today is based on the Venetian or Piedmontese tarot deck. With 78 cards, it consists of the major arcana (22 cards) and the minor arcana (56 cards). The major arcana are also called trumps.

If you want to dive deeper, you can learn all about the suits, their meanings, and how to read tarot in our Beginner’s Guide to Reading Tarot.

Since artists first started creating custom, ornate tarot decks, there have been many iterations of tarot decks over time. The deck most commonly used in the United States today is called the Rider-Waite deck.

First created in 1909, the Rider-Waite Tarot Deck was a collaboration between Arthur Waite and Pamela Colman Smith. Though her name has been largely excluded, Smith’s artistic talents were exceptional; she also illustrated manuscripts for a variety of famous authors and poets of her time, such as Bram Stoker (author of Dracula) and William Butler Yeats.

Smith was the first modern artist to incorporate more human figures into the minor arcana cards. She based her illustrations largely on the Sola Busca Tarot deck, which was on display at the British Museum at the time.

The Evolution of Tarot Readings, Past and Present

The tarot cards were not originally used for any divination or occult purposes; rather, they were used for diversion and games. The transition from traditional playing cards to tarot cards in Italy was more of a stylistic change, with the cards being used similarly.

It wasn’t until the 18th century that a Frenchman named Jean-Baptiste Alliette wrote a book linking tarot cards to divination. He assigned meaning to each card, leaning on astronomy and the elements, as well as taking inspiration from the Egyptian Book of Thoth. He also assigned a specific order and a spread to the cards that continue to be used today.

Alliette wrote under the pseudonym Etteilla, a name now associated with the origin of tarot card reading for divination.

By the 1900s, tarot became popular in the United States. With the creation of the Rider-Waite deck in 1909, Americans were primed to purchase and the deck made the leap across the Atlantic to become the most popular tarot reading option.

Just as Etteilla (Alliette) did in the 18th century, the Rider-Waite deck came with a guide assigning meanings for each card to help a reader better understand the deck.

Through that guidance and more mass-produced tarot decks, tarot readings have become far more mainstream than their earlier occultist predecessors. Today, a tarot reading could be done anywhere from a bachelorette party to a corporate team-building event!

It’s important to remember that tarot readings aren’t designed to tell your future. Despite their occasional historical links to carnivals and fortune-tellers, tarot cards are best for tapping into your intuition and seeking answers to specific questions.

You can read more about how tarot can help you with your love life, but just know that a tarot card reading is not meant to give future predictions. Tarot is a way to evaluate the resources you have on hand and to examine your past patterns and behaviors that might be affecting your present circumstances.

Ready for your own private tarot reading with your group? Whether you’re in Asheville or anywhere else in the world, we would love to help you connect with the cards and dive deeper into your intuition. Feel free to reach out if you have any questions! 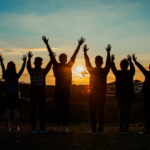 Say no to stress this holiday season.
November 4, 2022admin 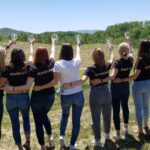